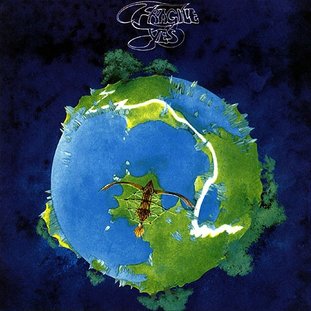 With the addition of Rick Wakeman, every single member of Yes was a top-notch instrumentalist, both technically and musically. Fragile produced the band's first radio hit, the exhilarating "Roundabout". For many Yes fans, this is when the promise of the early albums was realized. To them, it's when the band really arrived.
My own take is a little different. I've always thought Fragile is half of a great album, and the other half filler. Yes was in a hurry to record this album for a number of reasons, and they only had four songs. Though they're longish pieces, they still only made up 1/2 or 2/3 of an album. So each member wrote something to feature himself and those five pieces were added into the mix, and Fragile was born. These five solo pieces were not necessarily recorded totally solo, but each was helmed by just one band member. The solo pieces are treated as interludes between the four full-band tracks, which are the true highlights of this album.
"Roundabout" starts us off, Yes' most well-known piece, an intense, driving, exciting number which features everyone, but especially serves to introduce us to Rick Wakeman, who performs a monster organ solo. "Cans and Brahms", which I find dull enough to skip over more often than not, is Wakeman overdubbed performing (on various keyboards) a movement of a Brahms symphony. Hearing a real orchestra perform this movement makes Wakeman's version seem awfully weak. Anderson's solo piece "We Have Heaven" follows, in which more and more voices are piled onto the looping track as it progresses. It's dull and repetitive. Then comes another full-band masterpiece, the forgotten gem "South Side of the Sky", which makes you feel cold just listening, and has elegantly contrasting sections - the main body of the song, a medium-slow driving rock, and a quiet interlude representing a snowstorm, beginning and ending with flurries of quiet piano arpeggios. "South Side of the Sky", I think, really shows Wakeman's classical influences on the band's writing, and it's very, very effective.
Side 2 begins with "Five Percent for Nothing", a very brief instrumental written by Bill Bruford, followed by the bouncy "Long Distance Runaround", another full band piece. This one has some nice ensemble playing. Notice the detailed ensemble figures answering the vocals. "Long Distance Runaround" transitions into Squire's piece "The Fish", another repetitive few bars repeated while more layers of instruments and voices are added. The wonderful, pensive classical guitar solo "Mood for a Day" follows, and then the big closing number "Heart of the Sunrise". I have to go against public opinion on "Heart of the Sunrise" because I think it's the weakest of the four full-band pieces. Yes wrote some great long pieces, but I think this one goes too long to be slow the whole time.
Often when reading comments on this album, this concept is praised. After all, you get to hear each band member individually as well as collectively! You get a sense of how each one works on their own, and can then hear their contributions in the context of the whole group. However, I have to respectfully disagree. This album really shows why Yes is much better than the sum of its parts. "We Have Heaven" and "The Fish" are just one riff, repeated for a while, and they go nowhere. "Five Percent for Nothing" sounds like a few people goofing around for a few seconds. Even Rick Wakeman didn't like the corny arrangement "Cans and Brahms", which only proves that sometimes you really do need a real orchestra to play an orchestral piece. He called it "dreadful". Only "Mood for a Day" out of the solo tunes is a great piece.
But the big four pieces are Yes' best material yet. They're well thought out, all (except the relatively short "Long Distance Runaround") have perfectly contrasting sections, and they let this incredible band strut their stuff. While I feel The Yes Album is better overall because it's more consistent, Fragile contains Yes' best music yet and is considered by many to be their finest album. Check it out.

Bad Stuff: The album is fragmented. There are four great full-band tunes, but also various little interludes which are more distracting than anything else.

- Rick Wakeman wanted to contribute an original to this album, but due to his contract with another record company was not allowed to compose anything for Yes. Instead, he arranged "Cans and Brahms" as his solo piece. The piece he composed for the album ended up on his solo album The Six Wives of Henry VIII. Other Yes pieces contained contributions from Wakeman, but until Tormato, his name couldn't appear in a composer credit. (They got around it somewhat by crediting "themes" to him on Close to the Edge.)

- "Five Percent for Nothing" was titled such as a dig at Yes' former manager, to whom they had to pay five percent of their future royalties.

- The unusual bass sound in "Roundabout"? Squire played the part on his Rickenbacher bass, but then doubled the entire part an octave higher on one of Steve Howe's jazz guitars, giving it a unique, bright sound.

- This is the first of many Yes albums to feature paintings by Roger Dean on and inside the album cover. (He also designed the Yes logo that is seen for the first time on this album.) The paintings tell the story of Olias of Sunhillow, Jon Anderson's first solo album (which would be released several years later). Or perhaps Anderson's story came from these paintings.

- I loved the sound of Tony Kaye's B3 organ in Yes, especially on The Yes Album. However, he did not have any interest in playing newer electronic keyboards like the Moog, and the rest of Yes wanted someone who did.

Roundabout (Anderson, Howe)
Cans and Brahms (Brahms, arr. Wakeman)
We Have Heaven (Anderson)
South Side of the Sky (Anderson, Squire)