The Beatles
​[The White Album] 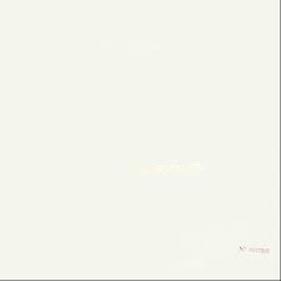 Hmm, the cover at the top of this review isn't all that eye-catching.

The album is really called simply "The Beatles", a self-titled album, but everyone knows it as the White Album. The original cover, seen above, had the band's name raised but not colored and a serial number in the corner. Only later editions printed the band name in gray.

​​     Where do you start with an album as legendarily famous as this one? Let me start by explaining what many will see as a shockingly low score for this classic. The White Album was the Beatles' follow up to Sgt. Pepper. (Not Magical Mystery Tour: MMT was not, in fact, made as an album! We got it as an LP in the US, but it was originally just some EPs and singles.) However, this record was made very, very differently. It has often been said that the songs on the White Album were recorded essentially as solo artists. Ringo contributed "Don't Pass Me By", George four songs, John and Yoko assembled "Revolution 9" and John and Paul each contributed about a dozen songs. The result is a throughly disjointed album jumbled together out the output of four people working independently. Most sources say that the unity of the album overrides its haphazard construction. I think those sources are being kind. The album IS haphazard. The style is all over the map, to the point where listening to this album is like playing a game where the rules keep changing. There are some really great songs on it, but also some clunkers. There are songs with the magnificent creativity the Beatles were so known for, but there were also quite a few that were very disappointingly drab. And there was never another Beatles album as disorganized as this amalgamation. It's a solid album, and has earned its status as a classic. But in my opinion, it is overrated and not up to par with the Beatles' other work of this era.
The joyful psychedelic wash of Sgt. Pepper and Magical Mystery Tour is gone, leaving songs that tended to be a little more intimate. Many are successes - the starkly lovely ballad "While My Guitar Gently Weeps", the cheery brass band-infused "Martha My Dear", the soaring "Dear Prudence", the pretty "Blackbird" with its unpredictable meter, the serene "Mother Nature's Son", and the thrashing "Helter Skelter". But a lot of the songs sound like filler or (unfunny) jokes. Why are "Wild Honey Pie", "Why Don't We Do It in the Road?", "Rocky Raccoon", and "Me and My Monkey" on a Beatles album? "Rocky Raccoon" sounds like the lyrics were never finished. "Wild Honey Pie" and "Do It in the Road" sound like someone screwing around. Even some of the more complete tunes are okay but utterly uncreative, like "Revolution 1", "Back in the USSR", and "Glass Onion". ("Glass Onion" is another where it sounds like they didn't bother to actually write lyrics that scan. There is a line with 7 syllables which is answered by a line with 10 syllables, the latter of which is just spoken through really fast so it will fit. ON A BEATLES ALBUM.) The surprisingly compelling "Happiness Is a Warm Gun" (assembled from four unrelated song fragments) actually works pretty well as a whole, but in the "I Need a Fix" part, a backup singer joins partway through a line, as if they forgot to come in. It's a studio recording! You can fix mistakes like that! The delightfully filthy "Yer Blues" has a final section where the instruments play a verse but there is no one singing, unless you listen closely, and you can hear John singing the first verse again ("I'm lonely, wanna die") but mixed so quietly that you have to strain to hear it. Is this a mistake? Did no one listen to this product to find these obvious flaws? Did they accidentally release a rough, half-finished mix of some of the songs? Isn't it a bit like releasing a book with dozens of typos? Do you see why I'm not as crazy about this album?
"Revolution 9" deserves a mention too. Has there ever been a more shockingly out-of-place piece of music on any album? "Revolution 9" is John and Yoko's attempt at a sort of concrete music, built out of stock sound effects, bits of speech, and fragments of recorded music, all haphazardly combined together. The piece does develop to a loud, intense climax (gunfire, anguished shouts) and there are a few recurring themes - the voice repeating "number nine", the backwards piano music, and the sports chant ("block that kick"?). After this chaotic nightmare, the album closes in the most unexpected way possible - with "Good Night", a gentle lullaby performed by Ringo's voice and an orchestra.
I don't intend at all to be totally down on this album. But since the general perception is overwhelmingly positive and I don't really agree, the review has become somewhat negative. The high points make this album very worth it. But I wouldn't put in the same league as the other late Beatles albums.

Good Stuff: Many of the individual songs are wonderful.
Bad Stuff: Very inconsistent, too many songs are poorly conceived.

- The Beatles themselves point to the recording of this album as the time when the band started to break up. Less than half of the songs actually feature all four Beatles; John and Paul hated each other's contributions; the engineer quit midway through; Ringo quit midway through (but was coaxed back); and so on. Their breakup was not far off.

- Tensions between the Beatles were running high while this album was being made, and Ringo got fed up and quit the band. Though he rejoined a few days later, Paul (himself a good drummer) recorded a few drum tracks in the meantime. Sources differ on exactly which tracks feature Paul's drumming, but "Back in the USSR" and "Dear Prudence" are two of them.

- John Lennon and Yoko Ono compiled "Revolution 9", by far the most bizarre and most out-of-place track I'm aware of on ANY record, from stock sound effects. The other Beatles didn't want it on the record, but it ended up on there anyway.

- A lot of the sounds and speech in "Revolution 9" were recorded backwards. The weird-sounding recurring theme is just an ordinary bit of classical piano music, but since we hear it backwards it sounds eerie and warped (and you don't recognize it as a piano).

- The "Paul Is Dead" rumors state that the mumbling before "Blackbird" say "Paul is a dead man, miss him, miss him, miss him" when played backwards. In fact, it's just as meaningless backwards as it is forwards. Wikipedia says it's "Monsieur, Monsieur, how about another one?" I can't hear it.

- Though the Beatles cannot be blamed in any way for this, this album convinced Charles Manson to begin his horrific murdering spree. He believed the Beatles (who had never heard of Manson) were sending him messages in their music, and that the White Album in particular was meant especially for him. (It's a long, weird story - I recommend the book Helter Skelter by Vince Bugliosi to explain it fully.)

- Whatever Charles Manson might have thought, a Helter Skelter is a playground slide to an English person. That's all that song was about.

- "Good Night", written by John as a lullaby for his son and given a lush orchestral backing by George Martin, is the only gentle, calm tune in the Beatles catalogue sung by Ringo.

- "Happiness Is a Warm Gun" is a very strange piece, isn't it? It was assembled out of four unrelated fragments John had written. Listening to some of the fragments in isolation on the Anthology records makes one wonder why they tried to record it at all. Much like the album as a whole, its construction out of unrelated parts hasn't hurt its popularity. It's a surprisingly compelling track.

- A silly idea: Ask a Beatle fan to name the only Beatles song whose title begins with the letter J, and see how long it takes them to come up with the relatively obscure "Julia".

[Yes, the official credit is Lennon/McCartney for all tunes written by either, but their writing was so independent at this point I feel like I should list them separately]