Sufjan Stevens
Illinois
​(AKA Come On! Feel the Illinoise!) 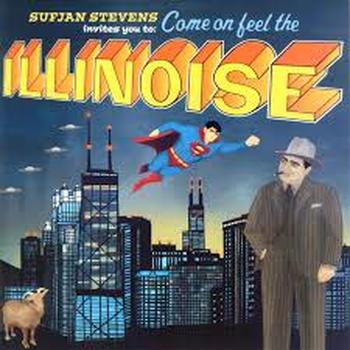 ​     Writing reviews is so much fun because every once in a while I get to discuss an album like this that is so unusual that even just trying to describe it is a challenge.
Multi-instrumentalist and composer Sufjan Stevens brings us the incredible Illinois, the second album of his project to write an album about each of the fifty states. (Michigan was the first.) Michigan showed promise, but Illinois shows full-blown genius. The album is divided into 23 tracks, but several are just short little reprises (like "One More 'Woo-hoo' for the Pullman" which is all of 7 seconds). Most of the tracks have very long names which will be shortened for this review (I'll list the full names in the track listing at the end). Each tune is about, or loosely based around, cities, events, people, or places in or associated closely with the state of Illinois. Some of them you'll have never heard of like the statue of Superman in Metropolis, Illinois. Some you'll already know about, like the Chicago Cubs. Some are cheerful (the World's Fair), some not (serial killer John Wayne Gacy, Jr). The album opens with the quiet "Concerning the UFO", then into the triumphant fanfare "The Black Hawk War" and then the unbelievably wonderful "Come On!  Feel the Illinoise!" which glides from a sweet 5/8 feel to a relaxing 4/4. There's a few relaxing numbers (including, believe it or not, a lovely ballad about serial killer wacko John Wayne Gacy). There's "The Man of Metropolis" which is alternately grungy rock and gentle ballad, the lovely "Casimir Pulaski Day", and the wonderfully arranged "Wasp of the Palisades". The funky "They Are Night Zombies" followed by the wonderfully quiet "The Seer's Tower" (say it out loud - now you get it) which is followed by the exuberant multi-meter exercise "The Tallest Man, the Broadest Shoulders". The end of this tune runs through so many Illinois-related things that you'll have trouble keeping up - the curse of the billy goat, Jane Adams, Benny Goodman, Shoeless Joe Jackson, the great fire of Chicago, and so on. The vinyl version, which is way better, has a nice closer too, "The Avalanche", which is not on the CD.
That all doesn't begin to tell the story. The tunes have unusual instrumentations - oboes, flutes, clarinets, saxophones, accordions, mandolin, banjo, strings, and brass all make appearances. There are a lot of background vocals on this album, and they're often singing something completely different and unrelated to the lead vocal. At times, there are two different vocal lines going at once, and at other times there are THREE. Sometimes they're on the same subject, but other times one layer of voices is singing about unrelated Illinois things, or just naming people and places with Illinois connections. It's a lot less bizarre than it sounds. Despite the seeming strangeness of the subject matter, the songs are emotionally powerful, really making the listener feel the joy or sadness or longing as Stevens intended.
Given that I've raved about this album, you can probably guess it's going to get a high score. But there are some reasons you may not be so fond of it. Though it's more energetic than Michigan, Illinois is mostly slow tunes and gentle singing. Stevens has a pretty voice but he sings in a gentle murmur all the time. For an album this ambitious and this long, he needs to learn to use his voice in more ways than that one, and that's why it gets a 10 and not an 11.
I can't really describe this album that well since it is so different, so get a copy and listen for yourself. It's not only brilliant, but brilliant in a totally new way.

Bad Stuff:  There are too many slow tunes and not enough fast tunes to balance a long album like this one.

- Listen to this album with the lyrics in hand (they're included with the vinyl version, and I'm assuming with the CD version as well). There are an awful lot of words which are interesting but you won't be able to understand unless you're following along, especially in the parts where there are two or three different vocal melodies going on at the same time, all singing different words.

- Sufjan Stevens himself played most of the instruments on the record - guitars and other string instruments, bass, some of the drum parts, keyboards, lead vocals, and woodwinds.

- A few years ago, I was looking for reviews of this album online, and nearly all read mostly like mine does - heavily positive, praising the creativity and uniqueness of the record. Only one was negative: Rolling Stone's. I've never cared for Rolling Stone's reviews because they tend to take incredible offense at any music that isn't bare-bones, three-chord, three-minutes-per-song rock. For this album, the review whined (paraphrased from memory) "Some of us don't have to have all this fancy stuff. What's wrong with just three chords and guitars?" Nothing's wrong with it, but I think good music has a canvas ranging from simple to complex, and from basic instrumentation to thick arrangements. I can't find this review any more, and Rolling Stone now ranks the album as one of the 100 best of the 2000s, so perhaps they came to their senses.

- The album cover originally had Superman on it (as pictured above), but was later replaced by balloons or, in some versions, just a blank space. Apparently someone didn't realize that Superman is, in fact, owned by DC Comics and you can't just slap him on your album cover without permission.

- I wonder if the goat on the cover (a reference to the ridiculous "curse of the billy goat" which supposedly kept the Cubs from winning the World Series from 1908 until they finally pulled it off again in 2016) would be there if the album was made today, now that the Cubs have at last won the series again?


The Set: (titles copied verbatim from the record jacket, I swear:)

Concerning the UFO Sighting Near Highland, Illinois
The Black Hawk War, or, How to Demolish an Entire Civilization and Still Feel Good About Yourself in the Morning, or,
We Apologize for the Inconvenience but You're Going to Have to Leave Now, or, "I Have Fought the Big Knives and Will
Continue to Fight Them Until They Are Off Our Lands!"
Come On!  Feel the Illinois!
Part 1: The World's Columian Exposition
Part 2: Carl Sandburg Visits Me in a Dream
John Wayne Gacy, Jr.
Jacksonville
A Short Reprise for Mary Todd, Who Went Insane, but for Very Good Reasons

Decatur, or, Round of Applause for Your Step Mother!
One Last "Woo-hoo!" for the Pullman!!
Go! Chicago! Go! Yeah!
Casimir Pulaski Day
To the Workers of the Rock River Valley Region, I Have an Idea Concerning Your Predicament, and It Involves Tube      Socks, a Paper Airplane, and Twenty-two Able-Bodied Men

The Man of Metropolis Steals Our Hearts
Prairie Fire That Wanders About
A Conjunction of Drones Simulating the Way in Which Sufjan Stevens Has an Existential Crisis in the Great Godfrey
Maze
The Predatory Wasp of the Palisades Is Out to Get Us!
They Are Night Zombies!  They Are Neighbors!  They Have Come Back from the Dead!  Ahhhh!
Let's Hear that String Part Again, Because I Don't Think They Heard It All the Way Out in Bloomington-Normal
In This Temple As in the Hearts of Man for Whom He Saved the Earth

The Seer's Tower
The Tallest Man, The Broadest Shoulders
Part 1: The Great Frontier
Part 2: Come to Me Only With Playthings Now
Riffs and Variations on a Single Note for Jelly Roll, Earl Hines, Louis Armstrong, Baby Dodds, and the King of Swing, to
Name a Few
Out of Egypt, Into the Great Laugh of Mankind, and I Shake the Dirt from My Sandals as I Run
The Avalanche (on the vinyl version only)

(Everything written by Sufjan Stevens)