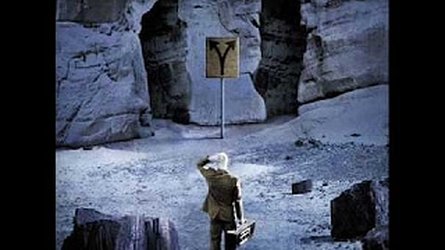 Snow by Spock's Beard is a masterpiece, a magnificent culmination of not only all of the wonderful Spock's Beard trademarks but also of everything you might want in a long concept album. Of the hundreds of albums I am familiar with, very few earn my top score, a 12/12. That should tell you how unbelievably brilliant I think Snow is.
Snow is a concept album, written almost entirely by Neal Morse, the story of an albino teenager (nicknamed "Snow") who discovers he has powers to see into people's lives and heal them. Snow, upon realizing his gift, moves to New York City and begins a religious movement (whose specific religious affiliation is not mentioned, but seems to be sort of a Christian praise movement) among the homeless, prostitutes, addicts, and other down-and-out folks. Snow's movement becomes a huge national phenomenon but fame catches up with him. The album has a lot to say about religion (not all of it positive), fame, and the pressures and temptations of being viewed as a messianic figure. Snow early on is a Christ-like figure - ministering to the poor and downtrodden. Later his ego gets the better of him as he realizes how much all of his followers want him and need him in their lives. This take on a great religious leader is very interesting - first he's an idealist, then he becomes greedy and full of himself. Snow is redeemed in the end, humbly realizing he is just a part of the picture. The story is paced wonderfully across two CDs (later also released on 3 LPs), making this album a very long one at just under two hours. And while some long concept albums seem too long or run out of steam 3/4 of the way through (including near-contemporary albums Subterranea and Testimony), Snow is packed completely full of amazingly crafted, perfectly paced music. Snow is long, but contains so many ideas it doesn't even begin to seem too long.
Something else to enjoy about Snow is that the individual tunes stand on their own. Unlike, say, Yes' Tales from Topographic Oceans, which contains nothing that resembles a single, Snow works incredibly well both as a whole and as a lot of parts. "Carie" doesn't need the context of Snow to be a beautiful, liberating love song; the stunning "Solitary Soul" would be a highlight on any album; the blazing "Devil's Got My Throat" could be the centerpiece of any album. And so on - most of Snow's pieces are great alone. There's "Long Time Suffering" with its crazy counterpoint vocals (a Spock's Beard trademark, also heard at the end of "Devil's Got My Throat"); the wonderfully raunchy "I'm Sick"; and the incredible high of "Open Wide the Flood Gates"; the dark low of "Solitary Soul" with its lovely three-part vocals.
There are loads of musical connecting threads that hold the album together musically. There are reprises of "Made Alive", "Devil's Got My Throat", "Wind At My Back",  "I'm Dying", "Love Beyond Words" and a reverse reprise of "I Will Go" (the reprise happens before the song). There are also numerous instrumental leitmotifs that recur in various forms - the "Love Beyond Words" theme, the "Solitary Soul" instrumental theme, and several others. Listen especially for the "Firth of Fifth" device - the lovely rubato piano solo in "Love Beyond Words" returns much later in "All Is Vanity", but this time played on synthesizers and confined into strict time. There is also a rhythmic theme which occurs in various places. This is the kind of thing conceptual albums need - not just a connecting story but music which flows as if it were all written together. The songs on, for example, The Lamb Lies Down on Broadway are almost never related to each other. But on Snow, every song contains leitmotifs heard elsewhere on the album. And the recurring musical ideas aren't just thrown in for the hell of it, they have meaning in the story, such as when the "Solitary Soul" theme sneaks in subtly to show Snow's feeling of isolation. And "I Will Go" echoes part of "Open the Gates, pt. 2"; only "Open the Gates" is fast and is Snow's early converts agreeing to follow him, while the slower "I Will Go" uses the same music and words to show Snow dedicating himself to his God and his cause. There are many more examples like this, but this review is long enough as it is.

Spock's Beard must have been aware of IQ's Subterranea when they wrote Snow. Subterranea was the only recent double-CD concept album when Snow was being written and recorded. Neal Morse took a few good ideas from IQ's magnum opus and, without meaning any disrespect for IQ, used them on Snow in a much more polished way. Subterranea opens with an instrumental overture containing themes from the rest of the album, as does Snow. (In fact, each CD of Snow starts with an overture.) But while Subterranea's overture is more of a curiosity, Snow's two are exciting pieces in their own right. (Snow also frames the first one better by starting the story briefly with "Made Alive" and then romping into the overture.) And "Devil's Got My Throat" from Snow I think borrows straight from "Failsafe" from Subterranea. Both pieces are in 12/8 with syncopated rhythmic themes. After Failsafe's extended instrumental interlude, the singer mutters "I don't know..." repeatedly. "Devil's Got My Throat" uses the same musical idea. After a long instrumental interlude representing a crazy binge, voices murmur "Moving forward in my mind" repeatedly as he returns to reality. Again, Spock's beard makes brilliant use of it where IQ's was just okay. I'm not disrespecting Subterranea, it's also a fine album. But Snow is several steps beyond.

With all this talk about the composition of Snow, a word about the performances should be added. As you would expect from this band, the group grooves amazingly on both aggressive and calm pieces, with the brilliant guitar of Alan Morse and Ryo Okumoto's organ standing out. The singing is also wonderful, not only does Neal Morse sing his heart out, but drummer Nick d'Virgilio sings two tunes ("Carie" and "Looking for Answers") and his higher, clear voice is perfect at representing Snow as he falls in love.
Snow contains furious drive, quiet reflection, carefully timed pieces, reckless abandon, many emotional highs using a variety of emotions, and climaxes that can move you to tears. Spock's Beard's Snow may well be the finest album ever recorded.

Good Stuff:  Cohesion, variety, focus, incredible writing, singing, and playing. Probably the best written album as a whole, ever.
Bad Stuff:  It's hard for me to come up with negatives about Snow, I feel it has it all. But Spock's Beard's wild energy from the previous albums (see, for example, "The Gypsy" and "Thoughts, pt. 2") is toned down a bit here.

- While making this album, Neal Morse converted to seriously hardcore born-again Christianity. Because of that, he decided to quit Spock's Beard. I have to ask: what kind of weird God demands you quit your amazing band? I don't buy it (especially since Neal went right on making music). But anyway, they made this album knowing it was Neal's last with the band. He left after it was finished and Spock's Beard continued without him.

- Snow's story seems to resemble that of the real life preacher known as "Sister Amy". I don't know if it's really based on it, but it seems likely.

- This was originally a 2-CD album. It has since been released on vinyl, and is so long it requires 3 LPs. Some creative editing had to be used because the music on the first CD never stops... and it somehow had to be split across three sides!