Pepe Deluxe
​Queen of the Wave 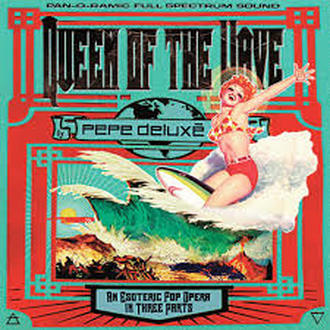 Queen of the Wave is an album that I only know due to random luck. When planning to visit Shenandoah National Park in Virginia, I was looking up what else was in the area and read about Luray Caverns, a beautiful show cave in which someone built a musical instrument. The “Great Stalacpipe Organ” was created by carefully carving and whittling cave formations so that each one produced a different musical note. The stalactites are equipped with rubber-tipped mallets, and those mallets are wired into and controlled by an organ console. The “singing cavern” is a wonderfully unique instrument, producing solemn, echoing, chiming sounds. The closest comparison I can come up with is a vibraphone played with soft mallets, but that doesn’t capture the deep, heavy tone quality of the rock. Anyway, some notes on Luray Caverns mentioned that some Finnish group called Pepe Deluxe had composed a piece specifically for the Great Stalacpipe Organ and recorded the piece in the cavern for their album Queen of the Wave. Pepe Deluxe’s background is in electronic music - not interesting to me, as I can hear repetitive, emotionless music by playing Mega Man 2 on Nintendo - and I would have never heard of them or this album if not for this random connection.
But enough personal stuff. Queen of the Wave is one of my all-time favorite albums. It is composed and arranged with extraordinary, wild creativity and loads of bizarre instruments and combinations of instruments; the performers are fantastic; and the album follows a wacky concept, based on an old sci-fi novel about Atlantis. (It is in fact subtitled “An esoteric pop opera in three parts”.) Pepe Deluxe switched up their earlier penchant for electronic music by making an album entirely out of live performances, but they’re mixed in such a way as to sound a little like samples. The aesthetic is deliberately retro, evoking the over-the-top prog concept albums of the 60s and 70s like, say, Thick As a Brick.
Albums like Queen of the Wave are the reason I love records. Whether you enjoy this album as much as I do or not, you simply can’t be bored listening. Every tune brings a different, new feel and nearly every tune has wildly unexpected but thoroughly effective instrumental combinations, sectional transitions, and style changes. It’s fascinating. You never know what’s going to happen next. As just one example, take a listen to “Go Supersonic”. The tune starts as a straight-ahead, uptempo rocker with guitar to the fore. The first verse is suddenly quieter, and the accompaniment light. A sudden crescendo drives into the louder chorus, which is sung by one vocalist but shouted by the other. Several changes follow, including one that uses massed voices singing with faux-operatic drama accompanied by bongos and harpsichord. This tune runs all over the place before finally returning to a second verse and chorus and ending. None of the tunes on this album are lengthy; just dense with unusual ideas.
Describing Queen of the Wave’s style is not easy, because influences come in from every direction. There’s a lot of classical influence here, most overt with “in the Cave”; a lot of it sounds like California surf rock; “The Storm” uses a jazz orchestra; the recording equipment used was deliberately retro (60s-70s era); and so on. I would submit to you that most truly good music is, at least a little bit, genre-bending.
Boy, is the engineering on this album great. I don’t have a great ear for recordings’ sound quality, having not worked in that area myself, but everything is extremely clear and forceful and balanced. Too many recordings starting around the time CDs became popular turn the very highs and very lows really loud so that every recording sounds like cymbals, bass guitar, bass drum, and almost nothing else. I have no idea why that stupid fad became so popular, but this album is an extremely welcome exception, with lots of clear crunch from all the middle instruments as well. The drums are magnificently powerful without being overpowering, and even the unusual instruments sound great. Hear the pipe organ at the end of “The Iron Giant” on a good stereo and it will knock you over.
Some other highlights include “A Night and a Day”, a villain song with some more nice interludes; “Contain Thyself”, which begins as a kind of quiet 6/8 sea shanty and gathers to a powerful, sublimely harmonized ending; “In the Cave”, a Beethoven-ish movement for Luray Caverns’ Great Stalacpipe Organ; “My Flaming Thirst”, a seduction song that could be a James Bond Theme; and the insane, frenetic “The Storm”, a musical depiction of the Atlanteans feeling their sinking home in an airship screaming through a thunderstorm.
This is another album that really deserves to be better known. Pick up a copy!

Good Stuff: Wildly creative arrangements, inventive combinations of instruments, top-notch singing and instrumentalists. An album that is totally unique and possesses its own distinct voice without it sounding forced or weird for the sake of weird.
Bad Stuff: You need to read the jacket to get much of a sense of what any of the songs are actually about.

- The basis for the album’s story is the sci-fi semi-classic A Dweller on Two Planets and its sequel An Earth Dweller’s Return. The first novel (now in public domain: you can download it for free) was written by Frederick S. Oliver in the late 1800s. Oliver, however, claimed that the book was channeled to him by a spirit called Phylos the Thibetan. Phylos, he said, was relating a true story about the fall of Atlantis. Pepe Deluxe seems to accept Oliver’s claim, because the liner notes credit the book to Phylos!

- The back of the album contains a summary of what each tune represents, with footnotes leading to a glossary of the characters and terms for Atlantean technology. Some of the definitions themselves have MORE footnotes for other glossary entries.

- This album has a bunch of quite capable wind players, heard most on “Contain Thyself” and especially “The Storm”. Why, then, is the initial pattern played by brass on “The Storm” tainted with a cheesy fake synthesized trumpet sound? They didn’t need that, as clearly evidenced by fine real trumpet playing elsewhere on more difficult material. Pepe Deluxe, if you ever feel the need to use bad fake winds again, call me and I’ll play it for real!

- I visited Luray Caverns in 2013, one year after this album was released. I asked the people that worked there if they remembered Pepe Deluxe recording there on the Great Stalacpipe Organ (which would have been presumably no more than two years prior), and no one had any idea what I was talking about.