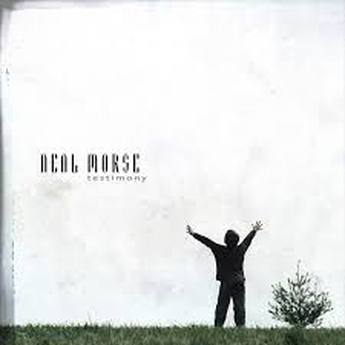 Testimony is a huge opus from the former Spock's Beard frontman Neal Morse, who left the band because God told him to when he (Neal) became a born-again Christian. (God, if you're reading this, I hope you didn't really tell Mr. Morse to quit Spock's Beard after making several of the greatest albums ever made.)
The album, a 2-CD (or now 3-LP) is a colossal concept album, an autobiographical record, all about how Neal found Christ. Now, normally I can’t stand Christian music and wouldn’t own it or review it. This is in no way intended as a criticism of the religion or of religion in general, just a criticism of bad pop music whose gimmick is aligning loosely with a popular religion. And I know Sturgeon’s law (that 90% of any sort of art is bad, and that shouldn’t discredit the 10% that is good), but somehow it’s even more distasteful to me that music that wouldn’t otherwise succeed gets by on its religious content. For the sake of kindness I will not list examples.
Having said that: the fact is the lyrics are not generally preachy nor corny, and the music is absolutely tremendous, using a great rhythm section and, in various places, a horn section and a string ensemble. Everything's tasteful, exciting, and quite well paced. There are many themes woven throughout the album and several instrumental overtures to break up the songs, and a few reprises here and there, all written in very skillfully. You will even catch some of Brian Wilson’s “modular music” idea - bits that recur as parts of several songs. (For example, “Like a lock to the door, like a latch to the window”.) There’s even a pair of songs with nearly the same melody, distinguished by different harmony. “Break of Day” is joyful, hopeful, while “Long Story” shares its melody, but is anxious, stressed, and dark.
There are different levels of concept albums. Some are called concept albums but really are just good, like Pet Sounds; some are just loosely connected like most of Gentle Giant’s albums, and some are really written as one interconnected work. To me, this musical connection throughout an album is what makes a true concept album - an album completely composed as one unified work. In this sense, Testimony is a lot like Snow, the album Neil wrote before this one. The direction is great and the emotion with which Neal sings is undeniable. Thank you, Neal, for not only singing with emotion but also writing it into your album! The band assembled for this record is fantastic, featuring progressive rock veterans from Kansas, Dream Theater, and more.
Testimony reaches a spectacular climax "The Storm Before the Calm" in which bits of the album’s themes collide in creative ways. The closest comparison I can come up with is the intense climax of Patrick Moraz’ i, in “Rise and Fall”. However, the album really runs out of steam after the climax and finishes with a few overly long, repetitive songs. “Oh, to Feel Him” is slow, way too long, and way too simple to be as long as it is. “Oh Lord My God" (the last full-on song) is just kind of medium everything and really isn’t very interesting either.
I am reminded of New Testament scholar Bart Ehrman’s observation that describing Hell is all kinds of fun and can involve tons of creatively horrible punishments, while describing Heaven is kind of dull, because all you can say is that everybody’s happy. We may be hearing the musical version of that here: The conflict of most of the album yields interesting music, and the happy ending (the last 18 or so minutes) is relatively bland.
If the incredibly high level of the rest of the album kept up all the way to the end, Testimony would earn a 12/12. Regardless of your religious affiliation, this is great music. If you are staunchly non-religious, fine, but I think you can still enjoy this most definitely Christian album.

Good Stuff: Incredible compositions, a wonderfully cohesive album musically and lyrically. The players are top-notch.
Bad Stuff: Last 20 minutes aren't as strong as the rest. The religious themes and the sheer length may turn some listeners off.

- Neil wrote this whole album, sang most of the lead vocals, and played nearly all of the guitar, keyboard, and bass parts (the only big part played by someone else is the solo in "Long Story"). In that way, this album is a bit like Songs in the Key of Life by Stevie Wonder. And before you bristle at that comparison and reflexively say "Neil's no Stevie Wonder", listen to this album.


The Set:
(I usually use line breaks to show where the first CD ends and the the second begins, but since Testimony is divided into five movements, I divided them that way instead. The first CD ends with "It's All I Can Do".)

The Land of Beginning Again
Overture No. 1
California Nights
Colder in the Sun
Sleeping Jesus
Interlude
The Prince of the Power of the Air
The Promise
Wasted Life

Overture No. 2
Break of Day
Power in the Air
Somber Days
Long Story
It's All I Can Do

Moving In My Heart
I Am Willing
In the Middle
The Storm Before the Calm
Oh, To Feel Him
God's Theme

(everything written by Neal Morse)