Patrick Moraz
[The Story of] i 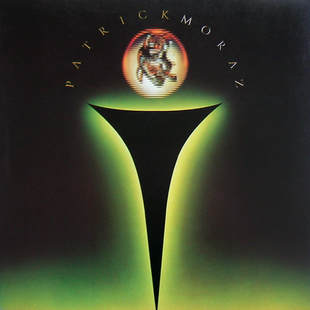 Hardly anyone in the pop music world knows how to write a longer piece of music. Patrick Moraz, a welcome exception, wrote a stunning album called (The Story of) i, his first solo album and an incredible piece of music. It's broken into seven tracks per side to help the listener figure it out, but really the only break in the music is between side 1 and side 2. (The Story of) i is one piece of music, a true concept album. This is nothing like any pop record you've ever heard. It's incredibly high energy, fiercely dramatic, very complex, full of odd meters and Latin rhythms, with some elements of baroque and romantic era thrown in. It's maybe half instrumental, with only three songs that could pass as pop songs in the usual sense. It's way out there, definitely a record that not everyone is going to like or understand (especially on the first listen), but it gets my highest rating.
Listen to how the themes develop over the album, the incredible synthesis of classical writing and Latin rhythms and catchy melodies, and the furious drive of the band on the uptempo parts. Highlights include the neo-baroque "Intermezzo", the furious "Indoors", the gorgeous ballad "The Best Years of Our Lives", and "Impressions", an improvised cadenza (performed by Moraz on piano) based on themes from the album. Listen to the fascinating combinations of instruments (just look at the credits to get an idea of how many instruments were used on this record). Some neat things to listen for: The vocals at the beginning of "Intermezzo" - French lyrics on the left track, English on the right. The countermelody in the bass under the vocals of "Dancing Now". The collision of musical themes, one after the other, in the climax "Rise and Fall". If any of this sounds even remotely like something you'd like, hunt down (The Story of) i at all costs. You may notice I almost never give my maximum score; that is because I've been saving it for this one.

Good stuff: One of the best conceived albums from a composition standpoint, ever. Also incredible playing and a brilliant mix of styles.
Bad stuff: It's hard to think of negative things here - but I will say that this record is not for everybody. It's extremely intense and complex and is not the kind of music you're going to catch all of the first time around.

- Moraz recorded with Yes for the album Relayer, after which Yes' five members agreed to each make a solo album. This is Moraz' contribution to that effort.

- The idea for the bizarre story of this album came about while Yes was on tour, and, driving through the countryside, they spotted a big, mysterious-looking tower. Jon Anderson and Patrick Moraz discussed what might be in there, and when discussion turned to fantastic speculation, the idea for this record took shape.

- Mr. Moraz was kind enough to include an insert in the album explaining each part of i in detail - the instrumentation, composition ideas, relation to the overall story, etc - all hand-scribbled and photocopied! Find an old copy of the record (not the CD) that has this, it's fascinating.

- I didn't feel it necessary to list it all here, but the jacket lists every kind of keyboard and percussion played by Moraz on this album - a list of 26 instruments!

- According to the actual record album, the title of this album is simply “i”. One letter, lowercase (which spell checks hate), written in the shape of the tower. “The Story of i” is a later adjustment of the title.