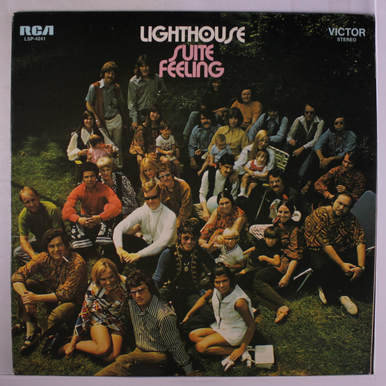 Lighthouse is one of those bands that deserves to be much better known. A lot of of people still fondly remember the late 60s - early 70s albums of Chicago and Blood Sweat & Tears, but Lighthouse is almost unknown. And if someone does remember this band, it’s for “One Fine Morning”, which was their big hit from the fourth album. I have never, ever met another human being who is familiar with Lighthouse’s first three albums, which in my opinion are by far their best. Why is this? They were a highly regarded live act who performed on bills with The Who, Chicago, John Lennon, Miles Davis, and so on. Sure, they were from Canada and not the US, but given the success of British bands at this time, one would think a Canadian band could enjoy US success as well. And of all the eras of pop music, the ten years surrounding 1970 is the one time when a lot of the highest quality groups and the most popular groups were the same.

In this early albums, Lighthouse was a different band than the one that had a major hit with “One Fine Morning” and a minor hit with “Pretty Lady”. Those later albums featured a band that had atrophied down to three horns and two strings, negating the point of having a string section. They also had weaker, more ordinary horn writing, yielding a relatively bland horn sound. The first three albums, including Suite Feeling, have the full band with four horns and four or five strings and fiercely creative writing.

The album opens with a cover of The Band’s “Chest Fever”, which is a nice opener but is atypical for this band. “Feel So Good” (not to be confused with the totally different “Feels So Good” by Chuck Mangione) sounds simple on the surface, but is a really nicely written song. The whole big ensemble is used wisely in a piece that’s subtle and calm. “Places on Faces” is an extended instrumental jam - at just under 11 minutes, it is by far Lighthouse’s longest studio recording. It’s also their only instrumental, and gives the players a chance to take some extended solos. We hear drums, vibraphone, trombones (overdubbed collective improv), trumpet, and guitar.

“Could You Be Concerned” starts my favorite stretch of the album. This tune, “Presents of a Presence” and “Taking a Walk” are highlights, despite the fact that “Presents of a Presence” is a really corny title. “Concerned” features an ominous organ opening leading to some nice horn section counterpoint. It’s a surprising and effective series of orchestrations. “Presents” is a distant, haunting anthem opening with wordless ensemble vocals and propelled by Grant Fullerton’s bass. Lighthouse didn’t have the ensemble vocal prowess of, say, Chicago, but at least wrote nicely for their singers. “Taking a Walk” is under five minutes long, but epic in scale. The tune is a quick, lively, light rocker which wanders through several keys as if through a changing landscape. The tranquility is broken up by the wheels falling off the piece, which falls into a discordant, atonal interlude. A gentle piano solo emerges, giving way to a lovely rubato flugelhorn solo, before restoring the original feel and arriving at a joyful ending. It’s a fantastic combination of totally unexpected but wonderfully organic, and is one of the many reasons it’s such a shame that this album is so unknown.

The final three tracks don’t resonate with me the way the rest of the album does. “Eight Loaves” is pretty ordinary, “What Sense” kind of rambles, and “A Day in the Life” is certainly weird but doesn’t really add to the Beatles’ original.

The first Lighthouse album had plenty of sections which could be accurately described as a wall of sound. So many instruments, all piling on to a towering wave. It’s awesome, but so is the second album’s subtler approach. There are a lot of magnificent orchestral touches here that don't clobber the listener. A few to listen for: Note the verses for “Feel So Good”. Each has a different beginning - a bass pedal point, a descending bass line, harmony vocals and handclaps - and the accompaniment features plenty of bass with the guitar and piano adding very quiet accompaniment. “Could You Be Concerned” features a ton of really nice horn counterpoint, which again is not blasted but stated quietly. The verses in “Concerned” are beautifully stark, with verse 1 featuring the bass simply doubling the voice against sustained low string notes, and only the next verse featuring a bass line. “Presents” uses the strings quite a bit, quietly keeping the singer company over on the left speaker. They’re joined by the horns on the right speaker in the chorus, and that tune is somehow still light despite the entire huge band playing.

Suite Feeling has a lot of really cool music on it, letting us hear this huge band from new angles and in new settings. However, it is less consistent than the first album, which is why I feel that it is overall not quite as strong. Even so, all of the first three Lighthouse albums are forgotten gems. All three deserve to be better known. If you see this somewhere, pick it up!

Good Stuff: The best tunes on the album are interesting, inspired originals with stunning orchestrations.
Bad Stuff: It's not a very consistent record.

- I’ve always thought it interesting that while Lighthouse and Yes are vastly different bands, there are some unusual similarities in their first few albums. Each group recorded exactly two covers on each of their first two albums before recording only originals from the third album on, and both groups covered a Beatles song (Yes - “Every Little Thing”, Lighthouse - “A Day in the Life”) and a song from the Birds album Fifth Dimension (Yes - “I See You”, Lighthouse - “Eight Miles High”). Both covered Richie Havens’ “No Opportunity Necessary”! If that wasn’t enough, both groups put pre-existing orchestral pieces into a cover song. Yes added some of the orchestral score from the western movie The Big Country to “No Opportunity Necessary” while Lighthouse bizarrely ended “A Day in the Life” by quoting Richard Strauss’ Thus Spake Zarathustra.

- What's with the album's title? Not only is it a corny pun, the album is nine independent tunes. None of them combine to form any sort of suite. Lighthouse wasn't done with album title puns. See the third album.

- Around this time, Lighthouse was invited to play at Woodstock. They declined, and one band member said it was probably not a very good decision in hindsight. Now that's understatement - think how huge the band could have gotten if they'd had the American exposure at the biggest rock festival in history!

- There is some goofing off in the personnel credits: both violinists are listed as “1st violin”, while one trumpeter is listed as “lead trumpet” and the other as “1st trumpet”. Also, “added percussion by Fat Man and Boy Blunder”.

- Some sources in the past have listed this as the third Lighthouse album with Peacing It All Together as the second. Both the copyright dates and Lighthouse’s own website, however, confirm that this is the second and Peacing is the third.