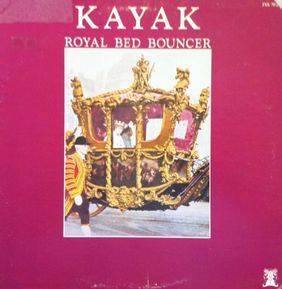 Kayak's not a well-known group, but with albums like Royal Bed Bouncer they deserve notice. So I'll do my part to see that people hear about Kayak and review their albums!
Kayak is a five-man prog-rock group from Holland. The nucleus of the group is Ton Scherpenzeel (keys, composer), Pim Koopman (drums, composer), Max Werner (vocals), and Johan Slager (guitars). The group went through bassists like Spinal Tap goes through drummers, but always had that twangy Rickenbacker sound like Chris Squire of Yes. On this album, it's Bert Veldkamp, who spontaneously combusted after playing "Said No Word" on stage one day.*
Royal Bed Bouncer is the third and probably best Kayak album. It's a little strange, but listen past the quirky delivery to some incredibly inventive songs. "Royal Bed Bouncer" is a weird, hyper opener which is nothing like the rest of the album. "Life of Gold" is next, a pretty ballad with a nice echoing effect in the vocal arrangement. Check out the unbelievable "Bury the World" - the grungy electric guitar opening dissolves into a quieter verse. Then comes one of the most unexpectedly moving moments ever captured on plastic as the heavy riff calms into an oboe solo (!), accompanied only by spacey, warbly piano effects. The oboe gently plays the raunchy theme from the opening before the whole band blasts out the theme the oboe solo started with. And if this sounds like an orchestration idea that's weird for the sake of weird, it's not; take a listen and you'll be amazed. "Bury the World" segues into "Chance for a Lifetime", the ravings of a nutjob trying to convince people about a coming environmental catastrophe; it features a wonderfully bizarre instrumental interlude and unexpected ending that cadences on the wrong chord then ends anyway.
Side 2 seems to tell a loose story, climaxing with "Said No Word", in which a furious 9/8 riff and weird breaks with echoey, dense bass guitar solos drive the energy high before the uncertain ending "My Heart Never Changed".
This record sounds a little comedic, a little silly, and I don't think that was Kayak's intent - the only song that's meant to be goofy is the opener. But the whole album sounds a little too fast, too high (perhaps it was sped up after being recorded) and comes out sounding a little like "Weird Al" Yankovic or the Chipmunks. So try to listen past that.

*(not really, it's a joke referencing "This Is Spinal Tap".)

Good Stuff: Wildly creative writing/arranging in parts, especially "Bury the World" and "Chance for a
Lifetime". Great playing, especially the keyboards and drums.
Bad Stuff: Exudes a quirky silliness which I am pretty sure was unintentional.

- "Bury the World" features a melody played in unison by oboe and bass guitar. I'd be very surprised to hear another recording with that same orchestration idea!

- This album has been rereleased with a totally different cover, the new one featuring a photograph of an animal (an antelope?) running across an otherwise empty desert landscape, which has even less to do with the record than the original cover. They like deserts on their covers - Periscope Life has one too.

- This is the only Kayak album from the early days of the band to come with lyrics, which really helps you, the listener, figure out what is going on. Trying to transcribe words quickly sung with a Dutch accent is not easy.