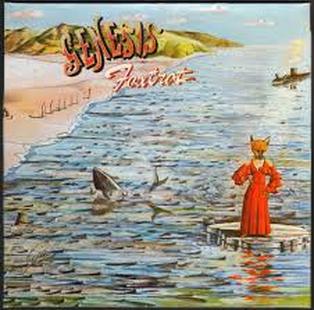 Foxtrot continues the steady improvement of this incredible group. This is Genesis' fourth album, and the second with the tremendous lineup of Gabriel, Banks, Collins, Hackett, and Rutherford, and the five of them really start to take off. They play wonderfully together, just as they did on Nursery Cryme, but what makes Foxtrot even a step above that is the composition. Foxtrot has a lot of different writing ideas, a ton a variety within an album (especially considering there are only 6 tracks on it).
"Watcher of the Skies" starts us off, with an ethereal opening becoming the background to a driving rock feel with powerful use of dynamics. Following is the lovely "Time Table", the strange Orwellian story of "Get 'em Out By Friday" featuring Peter Gabriel singing as various different characters, and then the constantly building "Can-Utility and the Coastliners". I love side 1 overall, but have to admit the "Get 'em Out by Friday" has never really grabbed me the way the similar "Harold the Barrel" did on the previous album. "Coastliners" is a highlight, marred only by its completely nonsensical title. The tune is a gradual build from a very calm opening to a racing ending.
Side 2 begins with the guitar solo and harmonics etude "Horizons" and then Genesis' only side-length suite, the expansive "Supper's Ready". "Supper's Ready" gives us a rare of glimpse of Genesis constructing a long, multi-movement piece. The lyrics are very strange and abstract; in fact, the only part I can really decipher is "Apocalypse in 9/8" which comes from the book of Revelation, which is itself rather impenetrable. But the music, the pacing, and the structure of the piece are wonderful, and the lyrics sound nice even if it's difficult to understand what they mean. Listen for the gleeful battle sequence early on, the ethereal "How Dare I Be So Beautiful?", the return of the "I know a farmer who looks after the farm" tune just before the "Apocalypse" and the "Guaranteed Eternal Sanctuary Man" theme returning to join with the opening theme at the end. Also enjoy one of my favorite Genesis moments, the lurching "Apocalypse in 9/8". Most of their unusual meter tunes come out with a sublime comfortable feel which sounds completely natural, but "Apocalypse" lumbers along with an intentionally awkward beat in which the strong beats always seem to fall where you don't expect them. Adding to this feeling is the fact that the vocal parts and organ solo often divide the beat differently than the underlying pulse, which is a steady 2+2+3+2. It's hard to explain, but you'll hear what I mean if you have a good ear for meters. "Supper's Ready" ends with the ridiculously grand image of an angel standing in the sun and the children of Jerusalem going home (more images from the book of Revelation).
I want to mention quickly an aside about asymmetrical time signatures. That's any time signature outside of the common 2, 3, or 4 beats in a bar. Many musicians are hostile to unusual time signatures, and I have no idea why unless it's simply that they aren't good at playing them or conducting them. Through the use of an unusual time signature (9/8 is not unusual in its common 3+3+3 subdivision, but is here where it's divided 2+2+3+2), Genesis gives "Apocalypse in 9/8" an absolutely unique rhythmic feel. Sure, bad prog albums may go into funny time signatures too often. But they offer rhythmic possibilities far beyond what our usual 4/4 can. Between this album and the next (Selling England by the Pound), there's "Apocalypse", "Watcher of the Skies", "The Battle of Epping Forest", and "The Cinema Show", which give us four totally unique and fresh rhythmic feels through asymmetric time signatures. This is an area into which music can expand, if musicians would quit making excuses. (Don Ellis has voiced quite similar sentiments.)
Genesis' ensemble playing and dynamics deserve another mention here. Both "Watcher of the Skies" and "Can-Utility and the Coastliners" use dynamics as compositional devices. "Watcher of the Skies" features sudden changes from loud to soft to separate one section from the next while "Coastliners" builds all the way through, one episode after another gradually building in volume, tempo, and intensity. These devices sound obvious to classical musicians, but they are so rare in the rock world that they deserve a special mention.
This is not a poppy album, and not the kind you'll put on just to hear your one favorite song on it. The whole experience is what Foxtrot is about, and it's worth the time it will take (two or three listens) to really enjoy it.

Good Stuff: Genesis' one and only side-length suite is a fascinating insight into their composition process. A few of the shorter tunes have cool ideas too.
Bad Stuff:  This is not the kind of album that gives you instant gratification.

- In the lyrics to "Supper's Ready" there's a bit about six saintly shrouded men and a seventh walking in front with a cross, and you can see them on the beach in the cover painting. I don't think they're intended to look like the KKK. (Do they even know about those idiots over in England?)

- "Supper's Ready" is tough to make sense of. But try reading Peter Gabriel's explanation of its lyrics, and you might become even more confused. To paraphrase, he and his wife were staying with someone who had an odd little room painted purple up in a turret on their house. They were in the room watching TV when a weird feeling came over them, they felt almost possessed and couldn't move for a long time, but they had supper waiting for them downstairs. It was such a bizarre and striking experience that it inspired "Supper's Ready". Does that help? It didn't help me either.

- Peter Gabriel claims his incredibly intense shouting at the end of "Supper's Ready" ("There's an angel standing in the sun…") wasn't really acting. He believed that he was going to die if the part didn't come out right and sang it like a man with a gun to his head.

- "Willow Farm" was supposed to be separate from "Supper's Ready". The band realized, however, that it made for a startling transition from the calm, gentle "How Dare I Be So Beautiful?" section into the loud, nasty opening chords of "Willow Farm", and kept "Supper's Ready" as a whole from being too relaxed.

- A fox-trot is a slowish ballroom dance, usually done to music that swings like old jazz tunes. Nothing on this album swings, so it would be poor choice if you wanted to actually dance the fox-trot.

- Peter Gabriel promoted this album by wearing a red dress borrowed from his wife (to look like the fox on the album cover).


The Set:
Watcher of the Skies
Time Table
Get 'em Out By Friday
Can-Utility and the Coast-liners