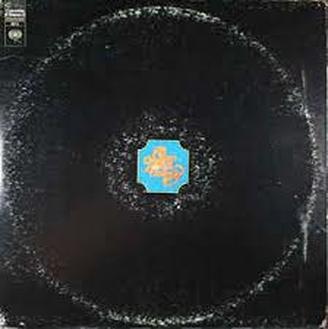 First things first: Why does my picture of the cover have ringwear in it? I have always noticed that ringwear on this album jacket tends to perfectly circle the small logo in the center, and would be interested to know if it was designed that way on purpose. It looks like the logo has landed in black water and is sending out ripples. While the CD editions tend to use the logo filling up the cover (as on the record's back), the image above is the actual LP cover. According to the band themselves, it was an answer to the Beatles and their famous all-white double album - a (mostly) black double album. Yes, Chicago did it before Spinal Tap!
One more quick note before delving into the real review. The name of the the band and title of the album may be up for debate. the band had been known as "Chicago Transit Authority" up to this point, so this may be considered a self-titled album. Inside the sleeve is a note rejecting ANY name for the band, but suggesting that if you have to call them something, just call them "Chicago". As for the album title, mine says "Chicago Transit Authority I" on the spine. They were already using Roman numerals on the very first album!

Chicago's first album may be their best, and may also be one of the finest albums ever recorded. I've known this album for decades, and hearing it still makes me sad that there isn't any music like it.
The young septet blazes through ten gloriously unique and powerful originals (mostly by keyboardist Robert Lamm) and a cover ("I'm a Man"). The record roars out of the gate with "Introduction", which flies through some great feel changes and transitions quietly into the mega-hit "Does Anybody Really Know What Time It Is?" There are majestic, pompous tunes like "Questions 67 & 68" and gritty bluesy numbers like "South California Purples". There are even free-form solos like "Free Form Guitar" and the intro to "Does Anybody Really Know What Time It Is?". The whole double-LP set is not only brilliantly written but also performed with furious emotion and full of completely unique tunes. No other tunes anywhere are likely to remind you of "Questions 67 & 68", "Someday", "Beginnings", or "Listen". And the emotional impact is huge - the fierce joy of "Beginnings", the grand arrival of "Questions 67 & 68", the tension of "Listen" and "Poem 58", the haunting blackness of "Someday", and the release of "Liberation".
The horn charts are fantastic, written right into the songs instead of just bipping and bapping here and there. No other album, except maybe Chicago II, has horn charts so seamlessly woven into the music, and it gives Chicago Transit Authority a feeling of cohesion and clarity that you won't hear anywhere else. As just one example, consider "Introduction". The horn section's repeated riff during the verses is almost part of the rhythm section. It's a lead guitar-style line (while the actual guitar is playing a rhythm accompaniment.) Following the blistering electric guitar solo, the horn section takes what one might call an arranger's solo - the section plays an exciting written-out feature during a solo chorus. While I suppose this is somewhat in the tradition of a big-band sax section soli, there are no other bands I'm aware of until the Cherry Poppin' Daddies in the 90s to use this particular device! For Chicago, however, it's a trademark. (See also "Poem 58", "Poem for the People", "Lowdown", "All Is Well", and others.)
Notice also the emphasis on the ensemble as a whole, rather than on individual players; for example, check out the trumpet solo in "Introduction". Think of how many recorded trumpet solos feature screeching messes of the highest notes the player can possibly play, and then listen to this one where Loughnane calmly blends right into the feel. Beautiful. Musical. Not just showing off but making a piece of music. Notice too the impossibly clean attacks, releases, and precise dynamic shadings of the horn section. They do these things together with more precision than any - ANY - other horn section on record.
There is a huge amount of free-wheeling creativity in the way this album was composed and arranged. I've already mentioned the unusual horn writing, but there's more to it than that. Notice some of the forms. "Introduction" and, on a smaller scale, "Questions 67 & 68" are extended prog-rock forms, the same kind that would go into "Close to the Edge" or "The Battle of Epping Forest" later. I've always thought that the early Chicago belongs in the discussion with those progressive rock groups due to the way their music is written. Instead, most people ignorantly group them with Blood Sweat & Tears due to the superficially similar instrumentation. Check out the weird harmonies in the end of side 2, and the even weirder ones in "Someday". "Someday" has a simple, nearly pentatonic melody over chords that change almost randomly. Every chord in the verse to that song is either major or suspended resolving to major, but the harmony is so non-functional that it doesn't sound like it. Chicago wasn't afraid to use dissonant, unanalyzable chords, like the last one in "Introduction" or the build into "Poem 58". "South California Purples" starts out sounding like it will be an ordinary 12-bar blues, but subverts the form halfway through with surprising harmonies and time changes.
Though lyrical insight is not at all my forte, I'd like to point out the fascinating blank-verse quality of most of this album's lyrics. Many of the songs (especially Lamm's) do not rhyme at all. To my ear, the messages are sincere enough that it actually took me a while to notice.

Here is the inside of the record jacket:

Chicago was never big on band photos, preferring to let the music speak for itself, but usually had a poster or band photos inside the album somewhere. For a band deliberately constructed to be a leaderless democracy, Robert Lamm (far right, standing) sure stands out in the band photos! But if any one person was the creative force behind this album, it was him: he composed most of, though certainly not all of, the music.
An often-overlooked strength of this band is its incredible vocal ability. Chicago had three very strong lead vocalists with completely different styles, all of whom also played an instrument. Keyboardist Robert Lamm (who sings, for example, "Beginnings" and "Listen") has a relaxing, smooth baritone. Terry Kath, guitar, had a similar range to Lamm but a more gutteral, soulful voice ("Introduction"). Bassist Peter Cetera's voice is high, clear, and youthfully expressive. He handles the soaring lead on "Questions 67 & 68". They harmonize well together when needed, and are capably assisted throughout Chicago's career by the three horn men, who are fine backup singers. This variety greatly increases what this band can do!
It's worth noting, especially since I have never seen this mentioned anywhere else, that this album has some very nice conceptual details. "Introduction" has a trombone and trumpet solo, but they are clearly separated by differing tempos and harmonies. "Does Anybody Really Know What Time It Is?" has a short trumpet solo at the beginning and a short trombone solo at the end. In "Beginnings" they find each other, trading solos and then joining in ecstatic collective improv. "Questions 67 & 68" finds them playing together in joyful, triumphant harmony. As the album goes on, the horns continue to play together but become more and more dissonant. In addition, note that the long fadeout of "Beginnings" features a percussion ensemble. "I'm a Man" uses the same percussion ensemble, but has a pounding drum solo played on top of it. After that solo, the horn harmonies behind the chorus become far more dissonant, adding a both thirds right in the middle of every chord. Doesn't this all seem to point to a theme of a relationship beginning in joy, then gradually decaying to tension?
Obviously, I love this album. Why only an 11/12 and not a 12/12? It was close! At times, this album seems to be stalling for time. I think they may be guilty of telling Terry Kath to solo until they had a double album's worth of music. (See the opening of "Poem 58", "Free Form Guitar", and "Liberation".) Despite this, Chicago Transit Authority is, quite simply, one of the best records ever made. Buy it right now. Even if you already have it.

Good Stuff: Brilliant and unique writing, arranging, and playing. No other group sounds at all like Chicago in their early days.
​
Bad Stuff: Too many long guitar solos - Poem 58, Free Form Guitar, and Liberation - just seem like padding. Terry Kath was an incredibly brilliant player, but enough is enough.

- Inside the album jacket where they have photos of the band, Walt Parazaider is shown playing the flute. He is indeed a fine flutist, but he doesn't play any flute on this album!
​
- "Liberation" was recorded entirely live in the studio.

- "I'm A Man" was the only tune from outside the band that Chicago would record until Chicago 16, more than a decade later.

- "South California Purples" briefly quotes the Beatles' "I Am the Walrus". I always thought its title was a reference to the fact that it is a subverted, altered blues, but have also heard that the title is slang for marijuana.

- The prologue to "Someday" comes from the Democratic National Convention in Chicago, 1968, a violent, protested event due to the Vietnam War.

- Chicago has long been in the unfortunate situation of being seen as a clone of Blood Sweat & Tears. First of all, the two groups are alike only by the very, very superficial fact that they have similar instrumentation. Their music was so different that it couldn't be clearer that neither group copied the other. BS&T was a rotating group of New York studio musicians. Their arrangements demanded extraordinary technique and were based on complex big band voicings adapted for the rock band. Their pieces were mostly wildly creative covers. Chicago was a group of friends and had no personnel changes until after the 11th album when Terry Kath died. They recorded original music with inventive new ways to use instruments which required less technique but more musicianship. BS&T was a rock/jazz hybrid, while Chicago was a straight rock band, at least until Chicago VII. I don't favor either band in this debate because they're both amazing, but they really aren't that similar.
...But, aside from that, Chicago actually formed first, in February 1967! BS&T didn't exist until that summer. However, BS&T's Al Kooper already had record industry connections, so BS&T managed to release two albums, including their second, a self-titled album that was a massive hit, before Chicago's debut hit the stores. 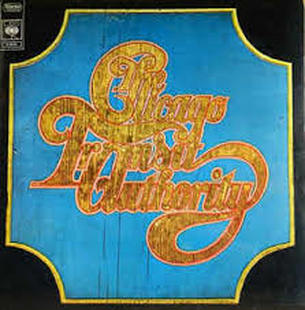