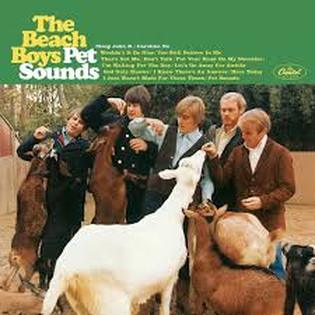 So much has been written and said about Pet Sounds that it's hard to know where to start. So I'll start by saying that Pet Sounds has a well-deserved reputation for being one of the best records albums ever produced, and an awful lot of people would say it's the greatest of all time. Pet Sounds is one of the rare albums that absolutely deserves this kind of praise.
In the mid-60s many groups were releasing albums containing two or three hits padded out by hastily recorded mediocre material. But then the Beatles started making albums like Rubber Soul which is thought through from beginning to end as a package full of great songs. Brian Wilson (the Beach Boys' main composer) set out to write an album like this - no filler, just well-written songs - and succeeded spectacularly. (He specifically cites Rubber Soul as an influence, and adds that he had a desire to compete with the Beatles.) We have Rubber Soul, Pet Sounds, and Revolver to thank for raising the bar and establishing the album (and not just the song) as an art form. Pet Sounds would be impressive no matter when it was made, but consider this: The Beach Boys were incredibly popular at this time - they were an huge international success and were more popular than the Beatles - in England! Anything they recorded at this point in their career would have been a ludicrously successful smash hit. But instead of resting on their success, they recorded the ambitious, meticulously crafted Pet Sounds which still, decades later, is often called the best record ever made.
Pet Sounds, written almost entirely by Brian Wilson (music and lyrical ideas) and Tony Asher (lyrics), is a departure from the early Beach Boys formula which calls for lots of songs about girls, cars, and surfing. Instead, the songs are deeply personal reflections on love, acceptance, and heartbreak (and nautical problems). As you would expect, the Beach Boys' voices are stunningly beautiful throughout, but what really sets Pet Sounds apart is the wonderfully elaborate and unusual orchestration. Besides the rock band foundation (which is itself treated differently than usual for a rock album), this album features flutes, clarinets, saxophones, brass, harpsichord, theramin, strings, bass harmonica, latin percussion, tympani, a bicycle horn, and other delightfully unusual instruments. Amazingly, none of it sounds gimmicky in the least. The magnificent orchestration extends to the voices, too. Each song is orchestrated in a unique way and nearly all have fresh, fancy chord progressions that give each a distinct character. It is interesting to note that nearly every other album that uses a large collection of instruments and inventive harmonies inspires the lazy, knee-jerk "it's pretentious" reaction from critics. I have never seen this criticism leveled at Pet Sounds.
So many of the individual tunes are wonderful that it's unfair to single a few out, but the joyous "Wouldn't It Be Nice", the heartbroken "Caroline, No", and the lovely "God Only Knows" stand out even on this amazing album. Most of the songs feature Brian singing, though Mike Love gets a few ("That's Not Me" among others) and Carl Wilson's gentler voice is perfect on "God Only Knows". Dennis Wilson and Al Jardine (neither of which sang a huge number of leads anyway) are heard only as background voices.
Pet Sounds is often claimed to be the first concept album. I don't think that is an accurate description: while it certainly has great direction and underlying themes, it is a collection of songs and not an album conceived to tell one story. However, it is one of the early albums made, deliberately, without album filler surrounding two or three hits.
I'm sure people reading this will wonder why it doesn't get my top score. Most of the album is contemplative and heavy - nothing here except the opener is exciting. I feel that a little more variety in feel - another faster, high-energy song or two - may have helped keep the album from being heavy on the slow tempos. But that's not a huge complaint. If you're not already familiar with this gem, you've got to get it.

Good Stuff: Composition, orchestration, singing, pacing - all stunningly perfect and wonderfully unique. No other album can be realistically compared to this one.
Bad Stuff: Tends to be slow, heavy, and grave. It's not as vivacious as other Beach Boys recordings.

- More extremely famous musicians than I could possibly list here have said that Pet Sounds is the greatest or one of the greatest records ever recorded and cite it as a huge influence. Paul McCartney, Elton John, Eric Clapton, and many, many others. In particular, George Martin claimed that Pet Sounds inspired the Beatles to make Sgt. Pepper.

- This album was released only in mono in 1966 (and in "duophonic" which is mono intended to sound better on stereo players). However, in 1999 Pet Sounds was remixed into stereo, and the new stereo version was released. It came out on a record by itself, and on a CD containing the original mono and the new stereo - Pet Sounds is a short album and easily fits twice on a CD. The stereo version is HIGHLY recommended; no, it's not the original, but you can hear the wonderful arrangements - both the instruments and the voices - better. Some parts are also balanced in a slightly different way - for example, the bass trombone blasts at the start of "Here Today" which are much louder on the stereo version.

- Most of the instrumental parts were played by session musicians, but the relatively simple "That's Not Me" was performed by the Beach Boys themselves.

- During "Here Today" you can hear some studio chatter during the instrumental section. Apparently, the microphone in the control room was accidentally recording and no one noticed that it had gotten on the track until it was too late.

- Pet Sounds is believed to be the first rock record to use a theramin (on "I Just Wasn't Made for These Times") and the first to use ""God" in its lyrics (on, of course, "God Only Knows"). A more famous use of the theramin came shortly after when the Beach Boys recorded "Good Vibrations".

- The tune "Pet Sounds" was originally titled "Run James Run", in hopes of getting it into a James Bond movie.

- "Pet Sounds" and "Let's Go Away For A While" were originally supposed to have lyrics, but Brian felt they were better without them.

- "I Know There's an Answer" was originally called "Hang On To Your Ego". Mike Love believed the song was about LSD (apparently it is said that LSD makes you lose your ego) and didn't care to sing the words, so it was changed.

- "You Still Believe in Me" was originally written with different words, a song about childhood. This is why you hear a bicycle bell (in the middle, when they sing the song's title) and a bicycle horn (during the fadeout). They had been "bounced" meaning they could not be separated from the other instruments, and they just had to leave them in the tune.

- "Caroline, No", especially the gorgeous bridge ("Break my heart, I only want to go and cry…"), was inspired by Glenn Miller ballads.